Into the dreamy “Woody” world…

Inspired by overheard conversations, childhood memories and photographic books on the natural world, Zara Wood, a British-born illustrator, creates each of her illustrated drawing with depth and dimension, character-focused with emotion and personality – a juxtaposition of her masculine signature form “Woody”…

As she sees her trademark as an “illustrator” more of a natural progression rather than an actual decision, her versatility has taken her to advertising, editorial, publishing and the fashion world in Europe and Australia. 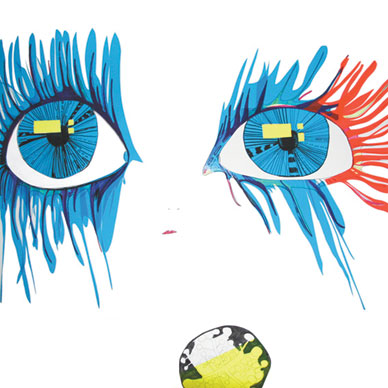 How do you define your illustration style? And what is the biggest difference that you see in yourself in terms of style?

That’s always a tricky one to answer! I have two core elements to my work practice – the illustration side and then, the fine art drawing/making side – obviously the two interconnect and intertwine with one another.

My illustration style – I love black outline drawings – lots of space… then there’s the cardboard… I love working with cardboards.

Something that you’re into since you were little?

Yes, indeed. There is something comforting about it – less daunting than a blank white canvas. However, I’m a bit of a contradiction because my digital drawings often have a lot of white around them. 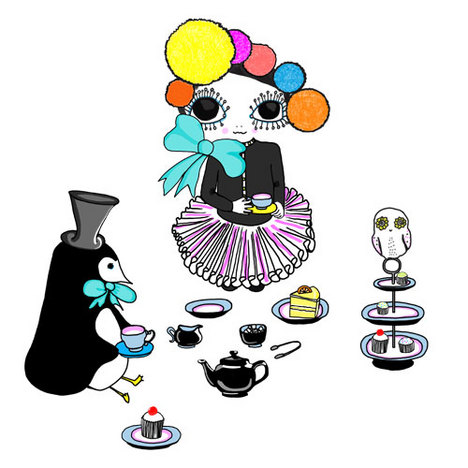 How do you find a middle ground with this contradiction?

Screen-printing is currently my middle ground – taking digital drawings and screen-printing on cardboard. I think no matter how long you’ve been illustrating, you are always progressing and learning your way through.

Sometimes old habits are hard to kick – the cardboard is one of them.

Where do you source these cardboards?

I source my cardboards from all around but the best cardboard is from mobile phone and video stores. They tend to have large sheets of cardboards 🙂 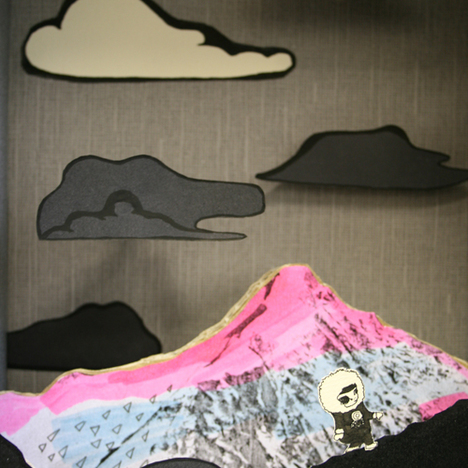 Do you just walk in and ask them?

Yes or go around looking for it on recycling days. Oh! Black fruit boxes are great too – they are screen printed black so the finish on the cardboard is very beautiful to work with…

Have you thought of creating a “cardboard” book (printed version)?

The problem is that I have lots of ideas – some from years back… they just take a while to be fully realized. I hope I am getting more patient or have a better sense of time.

How long have you been illustrating for?

I’ve been illustrating since 2001, full time since the end of 2004. It is difficult when you first start illustrating – to make a full time career out of it. Very often, a lot of juggling between money jobs and illustrating.

Tell us more about it…

My real break came when I was in Melbourne in 2002. I was approached by Stussy Australia/Asia to design a limited edition t-shirt – a relationship that continued for 6 or 7 seasons and I really enjoyed working with them.

They started off as an old school skate label and now, they are a massive global company. 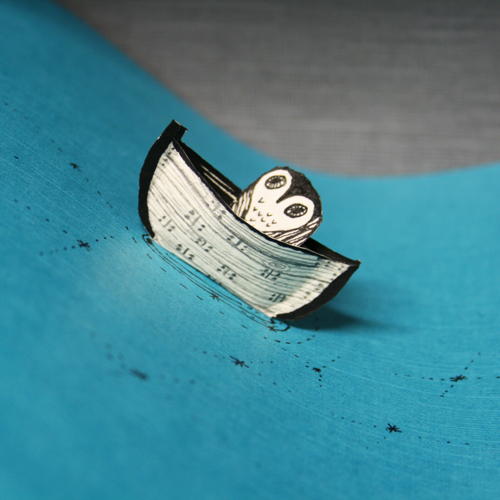 Did they allow any freedom?

They are into my style, so they allowed me to draw what I wanted – usually there was a vague theme to tie in with. They always treated the t-shirts like a mini work of art and I was allowed to put my signature on them. 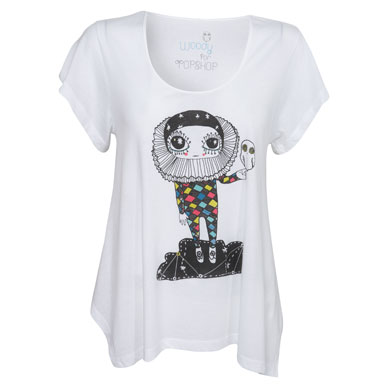 Was it your first project?

I suppose that was one of the first projects I was happy with.

One of your inspirations comes from childhood memories…

I’m an only child who had many pets, so I was often found drawing or playing with a rabbit or dog. I just thought drawing is comforting and at the same time, it is exciting. 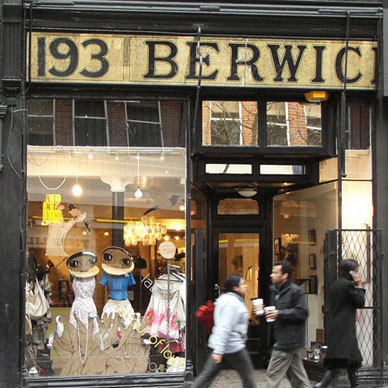 If you had to choose an animal to represent yourself, what would it be? And why?

I think I am probably a mixture of creatures – I am rather agile but jumpy like a cat but I am more loyal than a feline I think.

Sometimes you can overhear a snippet of a phone conversation – completely out of context and it sounds very weird or it conjures up a fantastic image.

I once overheard someone says that “dogs were mad, that’s why they poo” – in fact I often hear a lot of talks related to dog’s poo “Do larger dogs poo more?” “What goes through these people’s minds?”

When you conjure up these fantastic images, is there a message that you want to tell the people who love your work? Or a message to people who have made these unusual comments…

Very often, there isn’t a direct message I want to communicate to the audience although I do like using text in my work. Like today as I was cycling down to the studio, the phrase ‘live and let live’ popped into my head… you aren’t going to get on with everyone in the world, just as not everyone is going to like or get something from my work.

Most creative people tend to be fickle-minded – are you one of them?

I don’t think so. I’ve tried to set up a way of working which gives me routine – so I’m not inconstant, but I do like to experiment and adapt it on my work practice.

Do you tend to create a personality to the subject/object that you draw?

That’s a lovely way of wording it – but, yes! 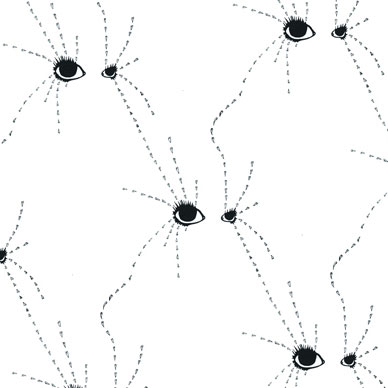 Do your drawings reflect your own character?

I think it happens sub consciously. Obviously you will have briefs to draw certain things – a particular mood, etc

These characters are quite “solemn” – or to put it bluntly – without a smile. Is it with a purpose?

The world you can create in images is limitless. I think I want the images to be sincere, so that you are able to connect to them, I just don’t want to create a ‘cute image’ for the sake of it, I hope there is something more to it – even in commercial work.

I am quite a reflective person, so maybe my characters assume that trait too. 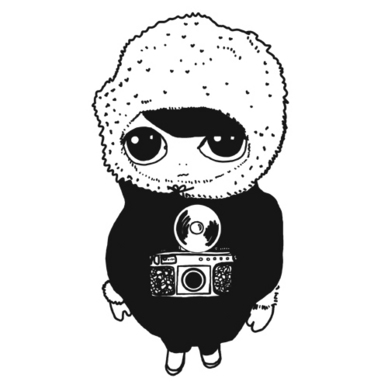 Most of your drawings are associated with eyes – any reason for this?

That’s usually the first question people ask. I’ve been told I have quite large eyes.
A family trait – I have always drawn large eyes since I was a child.

But one is slightly smaller than the other…

Luckily that’s not a family trait.

It’s probably a strange thing to say, but often when you get into that drawing zone, things just happen, I just make the decision of whether they are working or not. If they are working, then it stays.

What are the main criteria when taking on a project?

Creative freedom is important. I think trust between the client and myself is also crucial along with good communication. If you are able to communicate with a client successfully – that’s 90% of it. I suppose I’m lucky. The clients contact me because they like my work and my style.

I like to get involved with the concepts too.

What is the next thing in mind?

I can’t think of any band in particular but I do like working with musicians and it would be great to work with a dance company or theatre – making props. I really got into making artworks to fit inside the vintage boxes or lockets for Small Wonders. I’d also like to continue working on more jewelry items: functional art wear.

At the moment I’m working on two children books that I’m writing and illustrating. Also some professional practice lectures to give advice to university students.

Lots of students get in touch with me all the times, so I wanted to help them out – it seems not much has changed from when I was at university regarding how to find out whether you can make a living out of art.

That’s a tricky one and one that I can’t answer – it’s always up to you to answer that, otherwise it wouldn’t mean anything. I can only offer advice and examples of my experience.

To be honest, I think people are lost most of the times – sometimes finding your way has to happen on an hourly basis but you have to keep going. That’s all we can do – but don’t forget to enjoy it along the way. We always seem to forget that part.

A quote from King Kong – “you decide whether it’s a passion or a talent”. Hopefully it’s both but best not to be bitter if it’s only the first.

People often say you’ll find inspirations when travelling – does it work on you?

Yes I am a traveler. My travel to Japan stayed very much with me. I was in Tokyo for a month and I spent time in Kyoto and other places in the south – that was 2 years ago now.

I really enjoyed getting lost in Tokyo.

What did you get?

It was about the differences and similarities – like most travelling experiences. I loved that in one of the metro stations they played the first few chords of the Third Man soundtrack when you got off the train – I don’t know why though.

A lot of gems to pick up when one gets lost with the direction or place. The efficiency of the trains was incredible.

Did it inspire you to draw something in any way?

I did. It was more of a quiet inspiration – a personal one – I don’t think I’ve really used it as a theme as yet.

Would you like to draw something for us (Shift readers)? 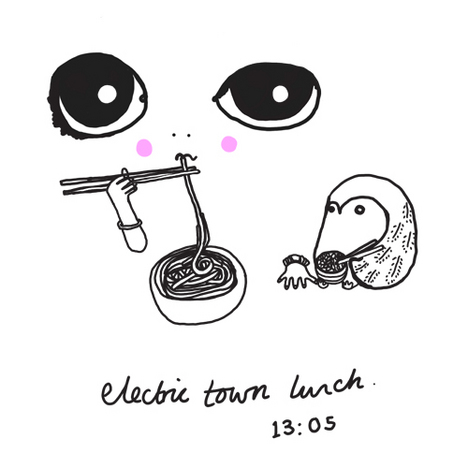