The expanding and transforming mysterious world.

Taking a look at the August visual on the SHIFT 2009 Calendar, you will see somewhat weird fantasy world created by Tokyo-based artist, Akira Nishitake who explores a wide range of work styles including painting, drawing manga, font design and creating a zine. As you might have read his report about the magazine symposium COLOPHON 2009 that was held in Luxembourg in March, he is now contributing the cover art for SHIFT this month. 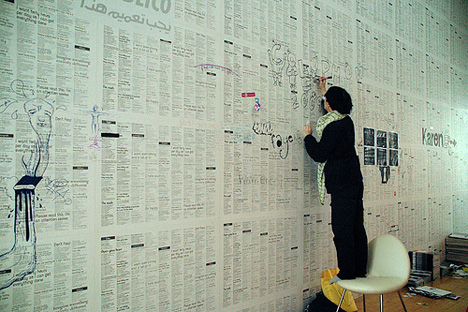 I’m Akira Nishitake. I used to live and work in Ehime, Kyoto, Kitakyushu, and Berlin and now live in Tokyo. I work across boundaries of media like creating paintings, manga and fonts. I also work as a member of CHOJIN CLUB, a manga team formed by artists.

Could you tell us your recent activities and projects?

I made a visual for the catalog for this year’s OFFF festival. I’m currently working on CHOJIN FONT for CHOJIN CLUB. I’m also involved in the project for planning characters for a live-action edition of the movie “GeGeGe no Kitaro”. (I’m very happy to get involved in it because I love Shigeru Mizuki.)

Please introduce some of your past works. 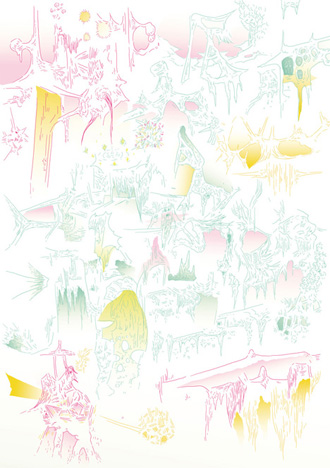 Unicomon
I created for an exhibition held in Hyogo Prefectural Museum of Art. I depicted dusk, sausage, roast chicken and idol. 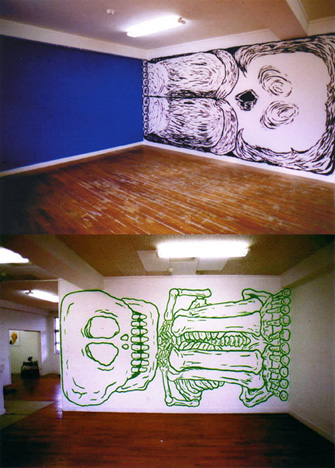 Surfacephobia / Reversephobia
Wall paintings drawn on both sides of a wall in Maeda Studio at CCA Kitakyushu. 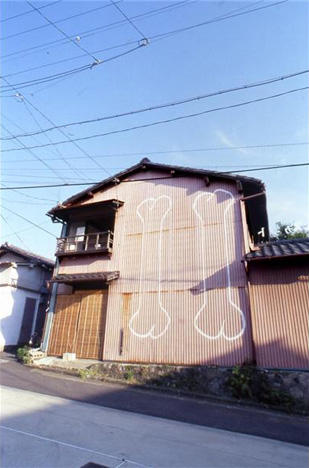 “ie-skirt” exhibition
For dog
With other 3 artists, we organized the “ie-skirt” exhibition as a part of the invisible-garden project, utilizing my friend’s studio located in Okazaki, Kyoto. In addition to painting on the interior walls and floors, we exhibited “For dog”, a wall painting dedicated for dogs on the exterior wall of the house. 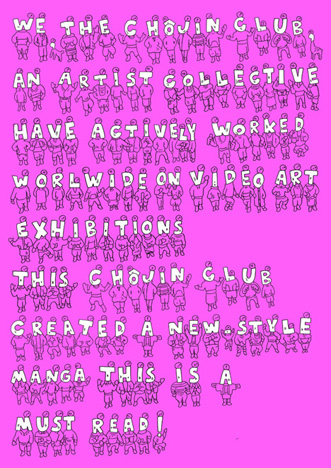 CHOJIN CLUB
CHOJIN CLUB is a manga group started by BAUZU, Mimi Murai, Shiro Habao and a manager and myself. We depicted our will for CHOJIN CLUB written in CHOJIN FONT. 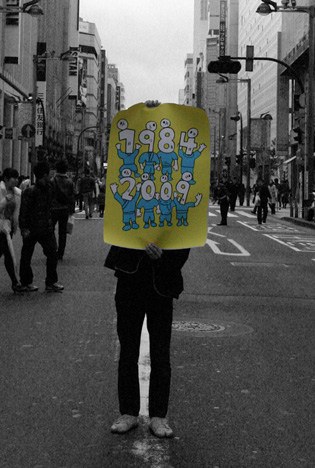 1984/2009
A poster for Flash mob.
I created this poster when I participated in the Flash mob, which took place to protest against the rule that the government of Tokyo can regulate public performances. The title 1984 was named after the novel by George Orwell. 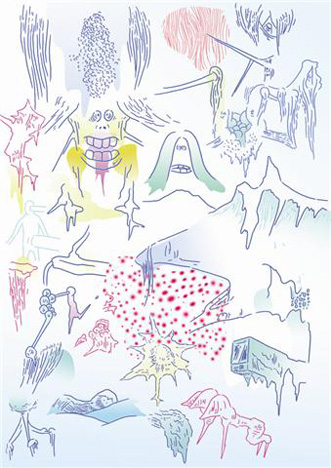 As shown in your works including the top page visual on your website, various poster works as well as the visual selected for SHIFT 2009 Calendar competition, we receive the impression of a visual world inhabited by mysterious creatures. What kind of world do you like to explore in your works? Please tell us your idea.

The world I always see is the newest organic visual soft world which grows up as I change. The interface for the soft is a pen and paper.
I always stock images in my everyday life, and those images ferment inside my body. Every time I create, the image shows up little by little as it scuba dives in the house. I’m enjoying it very much.
When I make a proper work, I make it discussing with the squishy world. 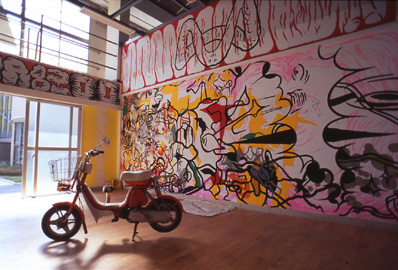 Please tell us how did you decide to pursue your profession in illustration and design?

As a kid, I always drew and read manga and didn’t study. And on the day my mother forbid me all aspects of manga, I decided to become a manga artist crying. (I haven’t drawn a long piece, so I’m still the way middle.) As I was a high school student then, I decided to make my way on art as I thought it might be possible to be more interesting than comics. 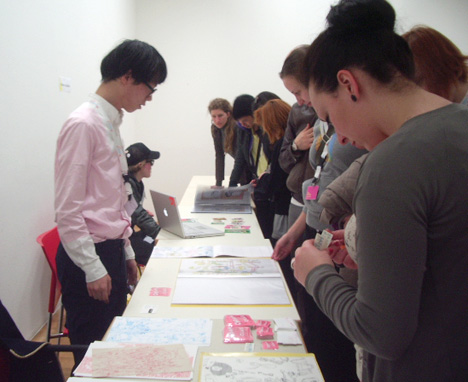 As you reported about the magazine symposium “COLOPHON 2009” in Luxembourg, you have participated in the event. What did you do there? Did you find any differences in the magazine scene in Japan and overseas?

As an illustrator who has passed judgment on the portfolio market of official programs, I had a chance to show my works directly to participants at the symposium.

The symposium was realized through peoples enthusiasm toward magazines. So I got same feeling toward readers and makers from all the countries in terms of the fact that they each love magazines. One thing I noticed is that there is more social support for individual makers in Europe. Compared to the Japanese magazine, magazines recognized globally are mostly English or bilingual (English and native language) magazines.

Please tell us your favorite artists, designers, music and things. 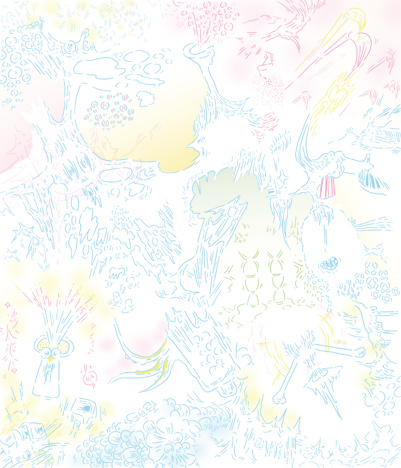 For your creation process what do you get inspiration from?

I think I get the biggest inspiration directly from music. I feel my stocked images are swollen more as I listen to music.

Please tell us your concept for the cover art for Shift.

In these years I started to have hay fever. I came across ideas that membrane and pollen might be in contact like this and made it to observe what they would look like. I got a support from Takumi Watanabe from steneco for its production.

Please tell us your upcoming and future plans.

I’m going to release CHOJIN FONT officially and a magazine CHOJIN CLUB. My piece will be featured in an Argentine magazine Acido Surtido.
For the future I want to make something that makes people laugh terribly. And I want to see my work spread and touch more people. Also I want to be active in energizing interesting people who make manga, magazines and zines created by small groups independently.