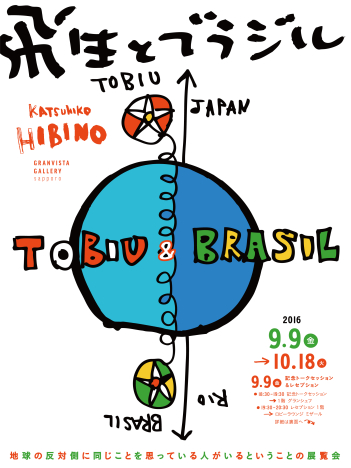 Katsuhiko Hibino, the artist’s exhibition “Tobiu and Brasil” will be held at Granvista Gallery Sapporo, from September 9th to October 18th. In recent years, he has been produced a number of art projects to shed light on the power of the recipient (participants and viewers), while making art works with local residents and pursuing a mechanism for the function of art in society.

His project named as “Day After Tomorrow Newspaper Cultural Department” was held at a closing of elementary school in Tobiu on June 28 and its participants sew the seeds, planted and put a rope to coil there. And after it, he stayed in Rio de Janeiro, Brasil and produced art works with local artists in this summer. For this time, based on the theme as “there is people who have the same thoughts on the other side of the earth”, he will exhibit his picture diaries about each project.

On September 9th, he will have a talk show as the special event.