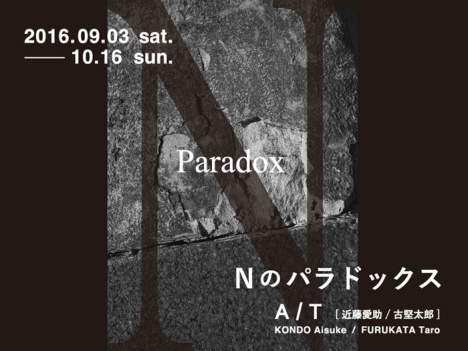 At Art Gallery Miyauchi in Hiroshima, an art unit “A/T” will hold their exhibition “N’s Paradox” based on Isamu Noguchi the architect. “A/T” is consisted of Aisuke Kondo and Taro Furukata.

A/T started in 2016. From talking over each other’s roots and identity, their coverage trip to Okinawa began, the home of the grandfather of Furukata. Shocked by the happening in front of Camp Schwab gate of Henoko swaying in the issue of relocation of U.S. Futenma military base, the two has thought various things such as war and terrorism, related parties and bystanders as the keyword through their current position, not only each of the roots.

This summer, in addition to the restructuring of their recording video in Okinawa, A/T researched basing on “Isamu Noguchi” who was born between Japanese father and American mother. After the Second World War, Noguchi produced a plan for the atomic bomb memorial to install in the Hiroshima Peace Memorial Park, by the recommendation of the architect Kenzo Tange. But the resistance of Judge side made it unemployed. And A/T will show works visualized through each eye of Kondo and Furukata, and multi-faceted structure superimposing the reading of poetry and literature. Its title “N” evokes “Noguchi” and “Nation”.