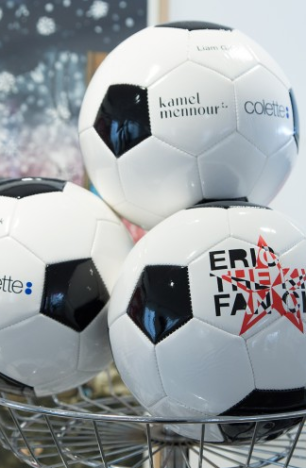 Eric The King Fan Club exhibition has started until July 2nd at colette in Paris. The man called “Eric the King” (Eric Cantona), in the mid-1990s, was incontestably the best player in Manchester United, hence in England.

The exhibition, conceived by gallery director Kamel Mennour and art critic Jean-Max Colard with support from Coca-Cola, offers to transform fashion venue Colette’s gallery into an ephemeral fan club of the cult footballer, who has, since leaving the sports field, had a second career as an actor and become an appreciator and collector of contemporary art.

It brings together existing or specially commissioned works by contemporary artists, all of them dedicated to the greater glory of Eric Cantona, including work by Mohamed Bourouissa, Jake & Dinos Chapman, Claude Closky, Liam Gillick, David Hominal, Claude Lévêque, and Philippe Parreno.