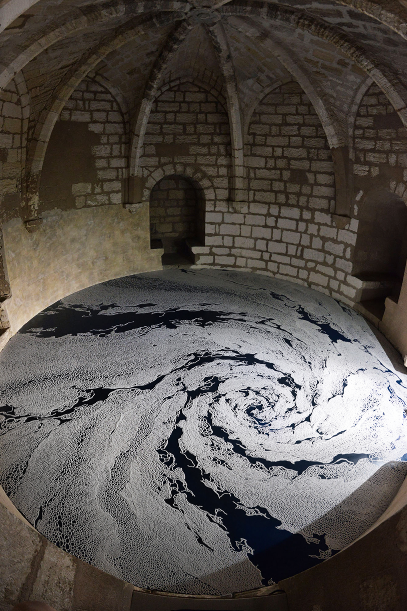 Installation of Motoi Yamamoto and Jean-Pierre Formica “Univers’ salt” is exhibited at Aigues-Mortes, an old castle left a medievalin southern France. The both artist has used salt for their art works.

In the castle tower of Aigues-Mortes, a walled city built in 13th century, Japanese artist Motoi has completed two monumental installations made of salt with French artist Jean-Pierre, which celebrates creative interpretations of the natural element. This place has a long history as a base town for the Crusades expeditions, but now it’s known for its wine and salt production.

Motoi’s “Floating Garden” composed a circular form filled with a lacework of carefully placed grains of salt. Each of these salt lines expresses pieces of memories and fragments of time. The whorl like a weather map pattern is used as a motif throughout East Asia to represent life and death, resurrection, rebirth and vitality. Until November 30th.