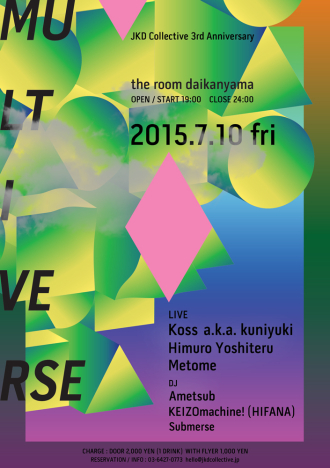 JKD Collective, a creative studio/artist collective specializing in the next generation of audio visual contents, will hold its own 3rd anniversary party “MULTIVERSE” on July 10th, this Friday.

JKD is established by Bruce Ikeda who is a co-founder and producer of Wieden + Kennedy Tokyo Lab, an audio visual and music production known for innovative creation. For the party and live to be held with gratitude to the 3 years that blessed with its exciting collaboration, the domestic one of the best musicians and VJs will perform. The lineups are a unit “Koss” a.k.a. Kuniyuki Takahashi adopting elements such as electro, techno and ambient, who is said to a treasure of Japanese music scene and the popular at MUSEUM STORE, Yoshiteru Himuro and Metome as live, Ametsub, KEIZOmachine! and Submerse as DJs. Don’t miss it!