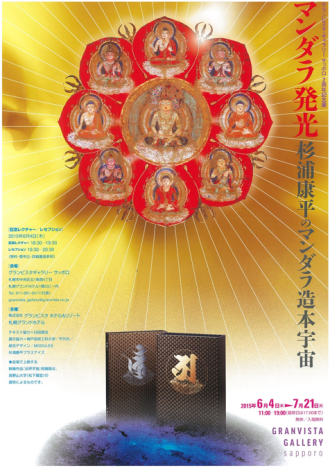 From June 4th to July 21st, an exhibition “Mandala Luminescence: Kohei Sugiura’s Mandala Bookmaking Universe” will be held at Granvista Gallery Sapporo. Kohei Sugiura, one of most famous magazine designer in Japan, by sublimating highly Western modernism and oriental aesthetics, has been opened up his own multi-dimensional approach that never ceased to breathe.

With exploring Asian cosmology as a key “Mandala” which began in earnest in the late 1970s, the design is connected deeply each other with some exhibitions titled “Iconography Exhibition Asia Spirit World” that he planned and composed as before. “Den Shingon-In The Mandala of the Two Realms (Ryokai mandara)”, the luxury limited book to be introduced in the exhibition, glows especially even in those vast works. Introducing its unprecedented magnificent charm of “Japan esoteric: to reflect the China thought” with his unique gaze, as exhibiting panels and video works he created.