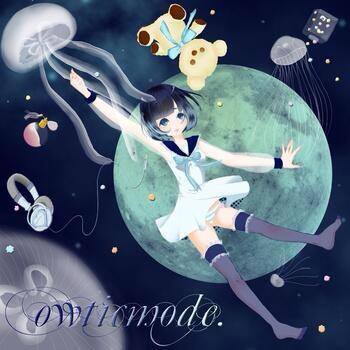 In April 2015, the creative complex “MUSEUM” established a new label in Sapporo, collaborating with sambafree.inc, a music production company. Aiming to release music on internet by artists based-in Hokkaido and to integrate internet and real world.

The first release is “owticmode.” of owtn., a space-first poem core idol. It’s also her debut album from Internet poem core lebel “POEMCORE TOKYO”. The style for reading a poem of her own has made a splash, with putting on sophisticated track by Munenoli Yano, she performed at the fashion show of “CREATIVE HOKKAIDO NIGHT IN TAIPEI” last November and “Art Fair Sapporo 2014” that global galleries gathered. Besides such an icon transmitting new culture to the world from Sapporo, she has formed “team owtn.” an artwork team with creators in Sapporo such as minaco. a photographer. Hoping her further activity. Till April 30th, her solo exhibition “owt(e)n.” is holding at Clark Gallery+SHIFT.

The special favors, as the first national distribution from MUSEUM LABEL, are a bonus track “Angel Volunteer” (2014 version) which attracts a lot of fans in the live performance and a trading card (sealed one randomly from 3 types). It will be released on June 17th at record shops throughout Japan.

It should be noted that, as a first buyer’s premier benefit, possible to get a download card of MP3 recorded owtn.’s poetry reading. From May 1st, the reservation order of “owticmode.” for download on iTunes will be started, and it will be possible to listen. At the same time, starting the preceding download of a song “Alice in This World”.