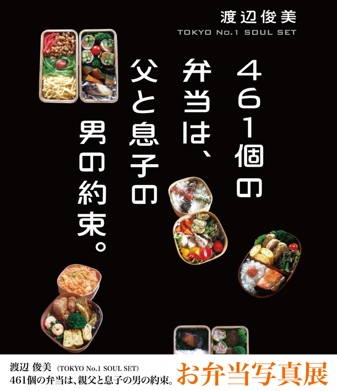 At KATA, a gallery space on the 2nd floor of LIQUIDROOM in Tokyo, Toshimi Watanabe’s photo exhibition “The 461 pieces of Bento; a promise between Father and Son” will start from March 20th.

He is, as the author of photo essay “The 461 Bento; a promise between Father and Son” published on April 2014, a musician of “TOKYO NO.1 SOUL SET” and “Inawashirokos,” and produces other musicians. And having a face as the founder and director of fashion brand “DOARAT.” Such a man, who has made his son a promise to cook a bento everyday during son’s 3 years of high school day all, will exhibits photos about his 461 pieces of bento he has been cooked.