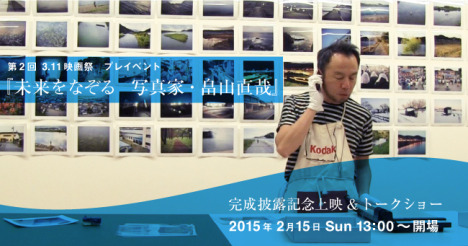 As the 2nd 3.11 Film Festival Pre-Event, ‘“Trace the Future: Photographer Naoya Hatakeyama” Memorial Screening & Talk Show‘ will be held at 3331 Arts Chiyoda, on February 15th, 2015. “3.11 Film Festival” began for the purpose, through the work, to share with many people, to think together, to improve disaster prevention awareness and to lead to organic activities about a variety of social issues that have been raised by experience the Great East Japan Earthquake.

Naoya is known for photographs of limestone mines and coal mines, rivers flowing through the clearance of dense buildings, and the underground space of the city. And in 2001 chosen as one of the Venice Biennale Japan representative, he is a global photographer. In 2011 of the Great East Japan Earthquake, home of Iwate Prefecture Rikuzentakata shed, since eliminating the mother, he frequently returns to his hometown, began to shoot the landscape that transfiguration. 4 years from the earthquake shortly. It also has become less that figure of those who walk through the disaster area with holding camera, but He has continued to take landscape photos unchanged. For whom what for, why continue to take?
This movie is a documentary that summarizes the fragments of long long record which one artist had to confront and inexorably earthquake, before mountains and rivers of his hometown. What was the hope for the future he saw the ends of the disaster?