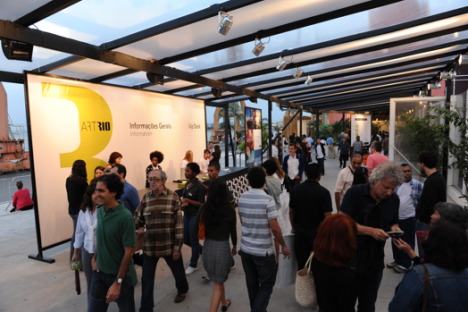 As one of the biggest art fairs in Latin America, “ArtRio 2014” will start from September 11th to 14th at Pier Mauá.

It is on the verge of its fourth edition and recognized as one of the most relevant events in the segment, worldwide. It will carry on its goal to assist in the development of the visual arts market in Brazil, by bringing to Rio de Janeiro the major collectors, galleries, and artists in the present scenario. The unprecedented curatorial projects conceived exclusively for the fair are a point of distinction of ArtRio.
ArtRio is already known among the public at large as a unique event, which affords the opportunity of seeing, in a single space, not only works by great masters, but also the works of new artists.
The exhibitions at ArtRio are divided into four programs – PANORAMA, VISTA, LUPA and SOLO, with works from top Brazilian galleries such as Fortes Vilaça, Luisa Strina and Anita Schwartz, as well as international galleries including Gagosian, White Cube and David Zwirner.

In addition, while approaching the application deadline on August 20th, the screening of “DOTMOV2013” was decided as Tech Art Lab planed, during this event, so let’s check them out.