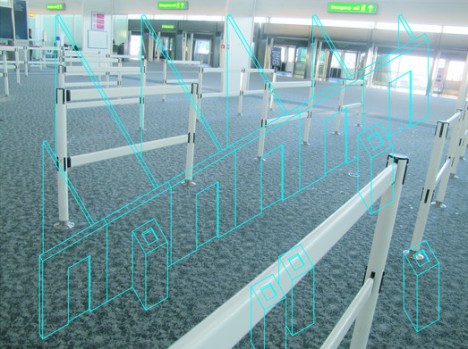 The Jürgen Ponto foundation has been awarding work grants to young artists since 2003. Within the framework of their grants, David Polzin and Jeronimo Voss – the recipients of the years 2010/11 and 2012/13 – will present their works in two successive exhibitions at the MMK Zollamt where a satellite exhibition site that belongs to the MMK.

David Polzin builds architectonic structures and large-scale installations out of paper, cardboard and wood. He investigates the utilization of architecture and its social function as well as the psychological impact it has on the individual.
At the MMK Zollamt, Polzin will incorporate a sequence of constructed spaces into the existing architecture. By means of bureaucratic procedures, he will endeavour to limit physical as well as visual access to the interiors of his hermetically sealed spaces, and thus to control and restrict the visitor’s perception. The unpleasant and frightening effect will be further heightened by the similarity of the spaces.

At the MMK Zollamt, Jeronimo Voss will translate his dOCUMENTA (13) contribution Eternity through the Stars – originally executed as a planetarium show – into the museum setting. In this installation, he uses Louis-Auguste Blanqui’s “many-worlds” theory of 1872 as a narrative framework for the visual linking of historical and astronomical revolutions. In his latest video essay, recording the results of a journey, which was supported by the Hessische Kulturstiftung, and which led him via Amsterdam, Paris, London and New York to Beijing, he follows the trail of the “phantasmagoria”.