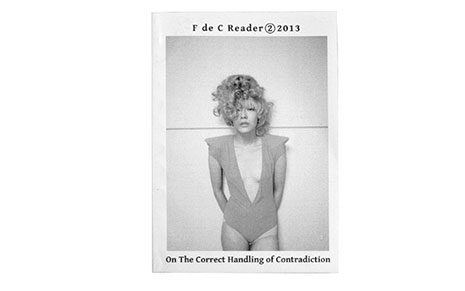 The F de C Reader is a project in fashion writing, a down-to-earth deconstruction of the cultural spaces that have come to be formed between fashion, fashion writing and the photographic.

The reader explores the language, methods and possibilities all which lie in these areas of production and can be of interest to those who have a concern for fashion. What follows is a note about the publication’s singular editorial agenda (along with spreads) but first, a list of contents from the latest issue: a three part conversation with publisher/editor/photographer Shoichi Aoki along with a complete facsimile of the first issue of his ground breaking magazine STREET (1985). Test Shots for Miuccia Prada by Anders Edström and Ann-Sofie Back, showing fashion photography as a living act and not a product, are laid out in the same binding as a conversation with young photographer Kawori Inbe or an interview with designer Jack Mauritsz, which in a one question/one answer form covers some 25 years of fashion history from his beginnings studying with Marina Yee of the Antwerp Six, via the rewards and tribulation of running his own label in the design utopia of the ’90s and to the present.

Other listed items include: Letter To A Young Poet (with a camera), Ren Hang in conversation with Erik Bernhardsson, Fin de Coppenhague (fiction) and a fictional homage in the form of a fashion editorial to the utopian Japanese architecture of an era just finished, Inner Cutting and the System, a conversation with Dooling Jiang about her label DIGEST, non-glam test shots for study of new European magazine makeup with Norihide Kose, an homage to recently passed away photographer Masahisa Fukase by Keiichi Nitta, designer Takashi Nishiyama in conversation with Yumiko Kikuchi and more. To go along with the 388 pages there is an additional insert in the form of novella titled Honduras, written by Robert Cook. Consultation, as a reminder that other more relevant connections exist in the world.