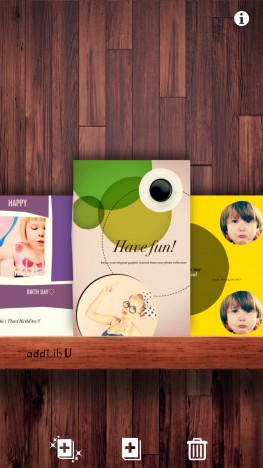 An app “addLib U have released by by WOW, visual design studio based in Tokyo, Sendai and London. The app “addLib U” is the second release in the “addLib” app series, which uses your iPhone photos to generate an original graphic album.

The new “addLib U” adopts the graphic theme of the “mid-century modern” style popular in the 60’s and 70’s in the US. “addLib U” will generate original graphic albums with simple taps on your iPhone. All you have to do is choose 4 pictures from your album, or snap images and tap the screen. The generated graphics will turn into a booklet. And you can share your albums with your friends online! You can also customize the layout by editing your own text. You can even print out your images as postcards or turn them into stickers. Enjoy your unique designs just the way you like them!