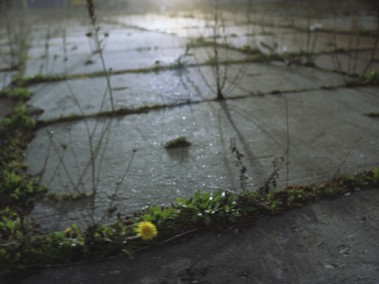 During Fall 2011 Magasin 3 presents a selection of film works by the Dutch artist Marijke van Warmerdam. In absence of any clear beginning or end, seemingly insignificant events are expanded into poetic abstractions. Leaves carried by the wind, milk dripping into a glass of water, a bunch of flowers vibrating in a bicycle basket or white jet trails across the sky — the meditative simplicity of the films bestows upon the viewer a moment of stillness and titillating wonder based in the everyday.

Marijke van Warmerdam (b. 1959) lives and works in Amsterdam. Since the early 1990s she has worked primarily in 16mm and 35mm film. She has exhibited at the Venice Biennial, Wiener Secession, Stedelijk Van Abbemuseum in Eindhoven and will be featured in a retrospective exhibition at Museum Boijmans van Beuningen in Rotterdam later this year.