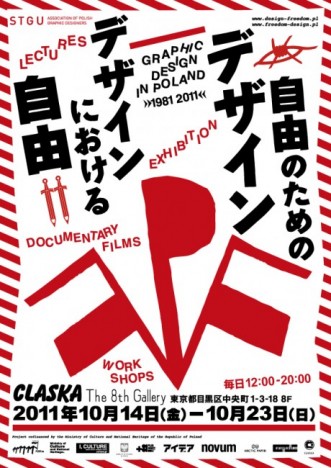 “Design for Freedom — Freedom in Design Exhibition. Graphic Design in Poland 1981 – 2011” is a presentation of the design of the last 30 years, during the system transformation in Poland covering the period from socialism to post capitalism.

The project shows design as forms of organizing the national sub-​consciousness into political, economic or artistic visual presentation. Graphic arts present the symbolic meanings and the hidden social emotions using the language of pictures, signs and various aesthetics. It becomes the unaware or targeted expression of political struggle, economic constraints or one among very few ways of escaping and creative expression. The role of a Polish graphic designer and citizen during the historical changes seems to be ambiguous. It is characterized by paradox: anarchy and conformity, individualism and yielding to trends, rigorism and autonomy, rationalism and romanticism. In a reaction to the dynamic changes and unstable standards of the various political and economic systems in the last 30 years in Poland, the designers developed an entire spectrum of creative attitudes and adequate styles.

The exhibition will show rarely presented posters, newspapers, books, packaging, signs and graphic arts produced between 1981 — 2011. It is going to be the first time the output of Polish design from the period of a 30-​year-​long transformation is presented in the context of struggle and conflict of political and social awareness. The selected works are the most representative and significant for those occurrences. When presented as a cycle they become a story about a drastic change of life models, priorities, ambitions, codes and ways of approaching that reality, that affected Polish people as well as changing visual culture.

The exhibition will be presented as an open working space hosting activities and events connected with practical and theoretical aspects of the Polish graphic design.

The “LIVE” exhibition of design will continue to transform and develop. A printing workshop will be created using a screen print, a duplicator and some other simple printing equipment. The exhibition catalogue will be also produced in a form of creative area submitted to interventions. While being supplemented by the original projects created in there by the graphic designers, it will be released and printed during the exhibition. The exhibition will be accompanied by a series of workshops and meeting with graphic designers as well as presentations and lectures of critics and historians of design including among others Grzegorz Laszuk, Jakub Hakobo Stępień, grupa Fajne Chłopaki, grupa Krecha, Małgorzata Gurowska, Agata Nowotny, Piotr Rypson, Michael Okraj, Agata Szydłowska and Lex Drewiński.

You can find more detail from here.