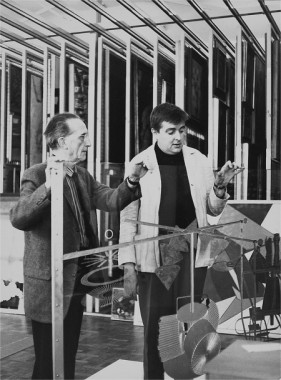 The Royal Swedish Academy of Fine Arts and Moderna Museet present De ou par Marcel Duchamp par Ulf Linde. The focus is not on an artwork and an artist, but on half a century of acute visual and intellectual interpretation, by Ulf Linde. The results include the backbone of Moderna Museet’s Duchamp collection, supplemented for the exhibition by replicas of Duchamp’s works never previously exhibited.

At the end of the 1950s, few people suspected that Marcel Duchamp would come to be seen as one of the most important artists of the century, and the most significant for the future development of art. In Stockholm, however, Marcel Duchamp was early on a major figure on the art scene that grew up around Moderna Museet. A unique encounter took place between Duchamp and Linde, the outcome being that Linde’s replicas were given Duchamp’s signature. Ulf Linde’s early work with Duchamp also laid the foundations for the international acceptance of Duchamp’s art, and the replicas played a key role in exhibitions such as Walter Hopps’ Duchamp retrospective at Pasadena Art Museum (1963) and the inaugural exhibition at Centre Pompidou in 1977.

“Throughout the intervening years, Linde has sought to elucidate the works’ innate poetry. En route, he caught sight of something that no one else had seen: their intrinsic geometry. These insights will very probably permanently alter views of Duchamp’s oeuvre as a whole. We all suspected that Marcel Duchamp was systematic in his approach, but no one knew about the mathematical precision,” say Susanna Slöör, Permanent Secretary at The Royal Swedish Academy of Fine Arts, and Daniel Birnbaum, Director of Moderna Museet.

The exhibition is showing for the first time in public Ulf Linde’s model of Duchamp’s last work Étant donnés: 1° La chute d’eau, 2° Le gaz d’éclairage. Ulf Linde’s private collection of Duchamp replicas and his unique study material are also on display. They are placed in context by a selection, made by Ulf Linde from Moderna Museet’s own collection, of magnificent works by Jean Arp, Francis Picabia, Giorgio de Chirico and CF Reuterswärd, as well as Tatlin’s Tower.

At the opening a catalogue in Swedish will be released containing an entirely new essay in which Ulf Linde summarizes his decades of investigation into the geometry of Duchamp’s works. The exhibition will be documented and this documentation will be published in English translation, together with texts by Ulf Linde, in an edition by Sternberg Press. The editors are Daniel Birnbaum and Jan Åman.