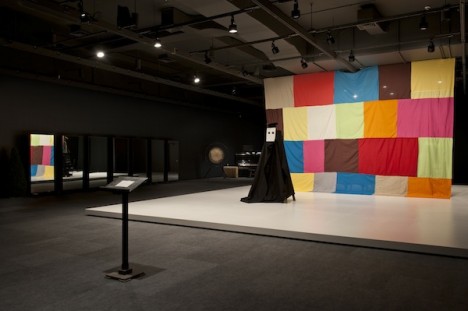 Vancouver-based artist Geoffrey Farmer will exhibit his first solo exhibition in Los Angeles at REDCAT from February 18 to April 10. Regarded internationally for his cumulative, research-based projects, Farmer creates context-specific sculptural works that grapple with his longstanding interest in the relationship between art objects and theories of drama and dramatization.

For this exhibition, Farmer transforms the Gallery at REDCAT into both studio workshop and theatrical space where an assembly of performers and mechanized objects act out a scripted narrative in the form of a sculptural tableau. Starting mid-February, Farmer is in residence to work on-site and create a new site-specific “sculpture play” titled Let’s Make the Water Turn Black in response to the region’s social history and Los Angeles’ influence on the counter-cultural movement. The exhibition begins on February 18 with a series of discrete installations on an architectural favßade built to separate the central gallery from the REDCAT lobby. These revolving installations act as a prelude to the first public presentation of Farmer’s sculpture play on March 5, 2011, when visitors are invited to enter the central gallery space for the first time.