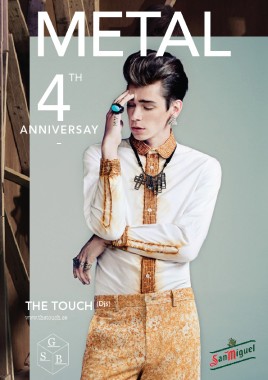 Since METAL is now produced in many different cities via a network of editors, the magazine can now rightly be referred to as a true international media. METAL celebrates its 4th anniversary, this time in Stockholm.

Metal’s special fourth anniversary issue is simply a treat. Quite aside from the voyeuristic fun of seeing exactly who has made them bespoke ‘birthday cards’ in their special project for the occasion – a subtle statement, perhaps, on their influence- the issue is packed full of the usual mix of fashion, music and culture. Fashion, however, dominates in this issue.

Phillipe Pourhashemi’s article and interview with Dries Van Noten, the quiet master of Belgian fashion, is revealing if rather business-like, focusing more on the practicalities of fashion rather than process. However, Axl Jansen’s animated photos styled by Ruben Debuck of the SS10 collections that were inspired by the three cities of Tokyo, Calcutta and Paris fill in the gaps visually. Here, Van Noten’s unique relationships between cut and textile combinations come to life. We, the flaneurs of these great cities, spy on them as they pass by.

The special ‘L’Homme Dior’ editorial, photographed by Sarah Moon, art directed by Kris Van Assche is, naturally, stunning. Styled by Mauricio Nardi, Moon’s signature dissonant photography emphasizing its own capture of a very specific moment is the perfect mode by which to communicate the clothing.

A whole gang of emerging photographic and styling talent pull out all the stops in the second part of the issue. Sit up and pay attention to Jolijn Snijders’ photos in the shoot styled by Mathieu Pabiot where bright stripes and garish prints from current menswear collections more than hold their own against Snijders’ flat harsh light.