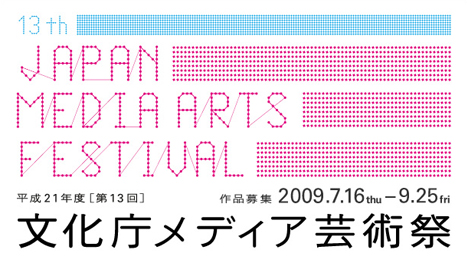 The 13th Japan Media Arts Festival calls for submissions of work using new media technologies such as computer, video, and the Internet. Regarding animation and manga, not only digital works but also works using existing methods are welcomed. The competition is open to both professionals as well as amateurs, commercial and non-commercial works without distinction. The works will be divided into 4 areas of art, entertainment, animation and manga. Submissions will be accepted from July 16th to September 25th. Visit their official website for more information.

The 13th Japan Media Arts Festival
Application period: July 16th to September 25th, 2009 (arrival due not later than the closing date)
Works to be submitted: Works must have been produced or released between 27 September 2008 and 25 September 2009. Works that has been updated during this period is also eligible for application.
Inquiry: CG-ARTS, Japan Media Arts Festival Secretariat Office
Office Hours: 10:00 a.m. to 6:00 p.m. on weekdays (Closed on Saturdays, Sundays, and National Holidays)
Tel：03-3535-3501
http://plaza.bunka.go.jp/english/