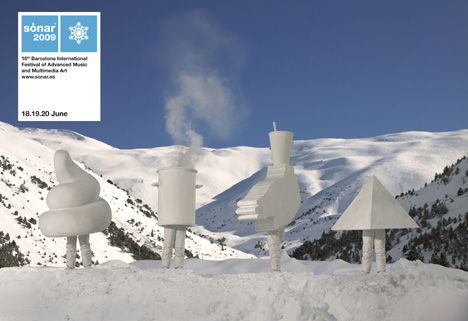 Sónar 2009, Barcelona’s International Festival of Advanced Music and Multimedia Art presents a line-up based on very young artists who are rapidly emerging names on the international electronic scene. New ground-breakers such as Crystal Castles, Fever Ray, Micachu and the Shapes, and many more with classic acts of the highest calibre, including Orbital and Grace Jones, and the special addition to the event will be a performance of RRIICCEE, lead by the charismatic actor and musician, New Yorker, Vincent Gallo, who will create his musical discourse by live improvisation on the SonarHall stage.

This year Sónar creates SonarKids, a new festival of music and creative experiences for children and parents, which will be held on Sunday 21 June on the Sónar by Day stages at the CCCB. The event will include renowned Spanish and international artists who will adapt their styles to their younger audience, with numerous activities to awaken and stimulate their creativity.
Perior to the main event for 3 days of June, Sónar spreads its wings to the United States for the first
time, with events in New York and Washington, and visits London once again in May.