KISEKAE in Japanese means “dress-up” in English. Via the site, you can download a set of pieces and customize your mibile phone display, that includes a standby display, menu design, images for sending and receiving calls and mails, alarm and wake-up images, and pict images for battery and service area status. The art works can be downloaded from the the Crypton Future Media-produced official site from your docomo, au and SoftBank mobile phone (only in Japan).

The first series of the project feature works of 2 artists who has participated in the previous MOBILE ART WATCH Project: Akinori Oishi and Wabisabi, a design team formed by Ryohey “wabi” Kudow and Kazushi “sabi” Nakanishi.

Started with the docomo site launched on September 7th, it opened on the au site on 10th and will be open at SoftBank site on 16th. 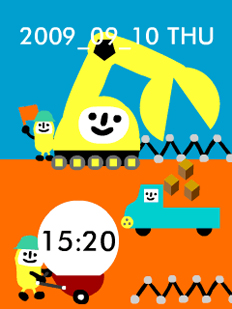 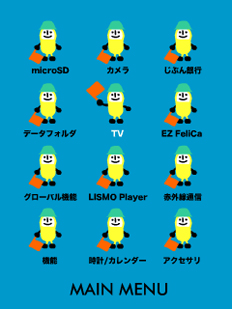 My inspiration is from Berlin. I visited the city twice for my exhibition in this year. We could still see many constructions around the city. It’s dusty and noisy in fact, but I believe it’s for making a new stuff. And Berliners have big energy and vitality. So, I love the atmosphere of the happy construction.

Akinori Oishi
Graphic Artist. Born in 1972 Japan. Graduated from Kyoto City University of Art and IAMAS (Internatinal Academy of Media Arts and Sciences). Since winning the new talent prize of MILIA 2001, working at the creative studio TEAMCHMAN (2001 – 2003) in France. Now independent artist, and teaching media-designs at Tama University in Tokyo and guest lecture at ECAL (Ecole Cantonale d’Art Lausanne/University of art and designLausanne) in Switzerland. The interactive art game “OPNIYAMA” was premiered at the grand opening at Palais de Tokyo in Paris (2001), the animation DVD for the swiss documentary film “Mais im Bundeshuus” (2005), and the guest artist at the world charactor arts festival “Pictoplasma Conference” in Berlin (2006) and NY (2008). 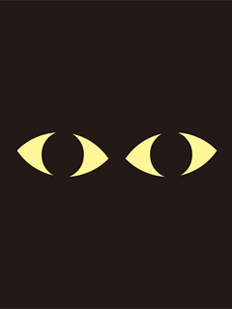 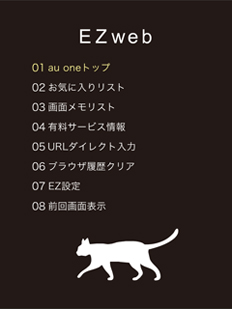 Do you know “Neko Chigura (Cat CHIGURA)”? Know as one of the traditional crafts in Niigata prefecture in Japan, Neko Chigura is a cat house made of straw braiding with great care. In addition to the lovery look to the house, cats comforting in the house look so cute! Neko Chigura definetly makes you happy. So, we made this piece to portray your mobile phone as the Neko Chigura and designed images of a relaxing cat. The black kitty cat will change its look in the day or night. Please name your own cat and get relaxed together! We named our cat as Kyoro-chan.