Jason Bruges Studio is a London based studio funded in 2001 and which is formed by a crossover team in-between architecture, lighting and interactive installations.
“We are obsessed with space”, says Jason, while he talks about some of their projects such as the Imaginary Radio (BBC), or a George Michael concert installation. 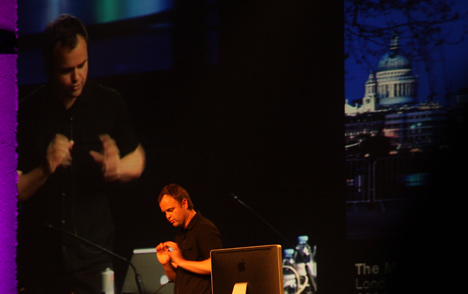 Jason Bruges during his presentation

Making reference to current festival’s theme, Jason says that “part of the design prototyping is fail. And we learn a lot from failure”. The studio plays a lot with light, colour and space. They also work based on performance: “How people perform in space and how they interact with it”, says Jason, “I am also attracted by visualising the invisible”, continues while he shows their beautiful Wind to Light installation. 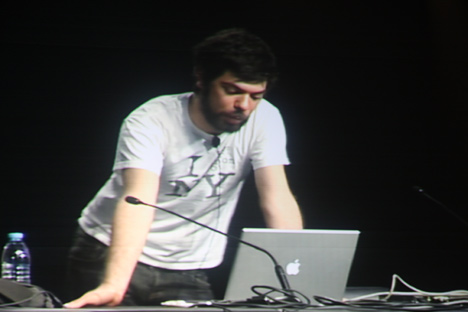 Dave Ferner (UVA) during his presentation

United Visual Artists (UVA) is another London based studio founded by three people in 2003. They had the chance to work with a Massive Attack tour very soon. The 100Th Window tour in 2003 for which UVA created an installation formed by lots of text messages coming from actual SMS sent by the audience, mixed together with Internet and location data.

They expanded to 17 people and they work between corporate commercial projects for clients such as MTV, Sony or Nokia (to pay the bills) and other non-commercial projects.
Dave Ferner (Animation Designer at UVA) is here to talk about Designing tools to make art. UVA create their own tools for live event performances such as concerts.

Dave explains a usual problem they face in interaction design: “How many control do we give to the people?” (playability vs good-looking). “You can measure the success of an interaction design if kids get it”, says Dave while he shows a picture of a little girl playing with one of their installations.

UVA uses OpenFrameworks for some of their work and they recommend it to everybody. OpenFrameworks is a C++ library created by Zach Lieberman and Theodore Watson. The library was used for the popular Light Graffiti application by the Graffiti Research Lab.

Dave Ferner shows a tool they created for animating without keyframes and which they have used for a video clip. Instead of creating keyframes you can add effects that affect objects such as turbulence and pull the objects around interacting with your mouse. You can record in real-time what’s happening (what’s being generated) whenever you want. 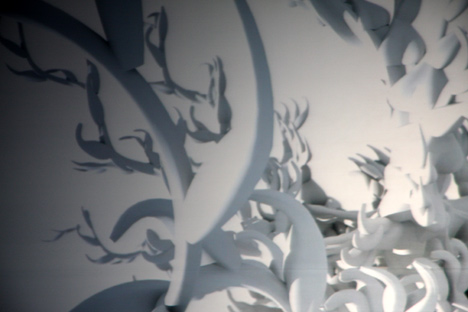 Approaching to the festival’s theme, Dave Ferner talks about a pitch for the Natural History Museum in London. They have generated quite complex 3D plant-forms which have been printed as real 3D objects. Some generative sculpture that illustrates the multidisciplinary character of UVA. “We learn a lot from unsuccessful projects”, concludes Dave.