The forth for “MOBILE ART WATCH project” is harmonica bldg.‘s. 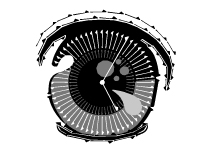 On this “MOBILE ART WATCH project“, we distribute works through a mobile phone in collaboration with Crypton Future Media. You can download the pieces on the official site of Crypton Future Media with a mobile phone of Au or SoftBank (only in Japan), and use them as a watch on your phone. This time, we feature the works by a Sapporo-based design unit, harmonica bldg..

The “radical eye” and “radical green” consist of the graphic elements of Kanji, following the design series from last year’s “Goshujin-sama Exhibition“. The “radical eye” is an analog watch with an “eye” of “Moe-Kyara (character of beauty in the bud)”, which can be said as a symbol of Manga or Anime becoming established as Japanese culture.

Although the graphic elements was the same, the “radical green” has a concept of “golf” which has the open image contrasting to the closed image of Manga or Anime. The number is expressed as “green” which has both nature and the artificial shape.

The other 2 works were focused on an arthrogenous doll, which establishes the unique form while shaped like human being. The “doll num.analog” has the hands using the doll’s limbs, which tell you the time turning over the globate axis.

The “doll num.digigtal” shows Roman number instead of the general Arabic number in order to make a good use of the form of the doll’s limbs. Therefore, it provides classical atmosphere even though it’s a digital watch. It might be for people having leeway in time as it’s hard to read.

We’ll update new works every 2 month on this project. The next will be in April.

For the website use, the blog-parts version is now available. (Limited time offer).