The second for “MOBILE ART WATCH project” is Akinori Oishi.

On this “MOBILE ART WATCH project“, we distribute artists’ works through a mobile phone in collaboration with Crypton Future Media. We release the second works on June 7th.
The first was “HORMON WATCH” by Wabisabi, and the second, by Akinori Oishi are 3 kinds of watch: “Titan”, “Turquoise”, “Pales”. 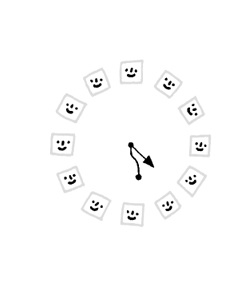 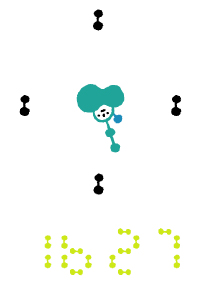 “Titan”, its hand is a bit bent, so it indicates a bit delayed time. “Turquioise”, it tells you time by the end of a cloud and tail. “Pales”, its numbers of pictogram do the exercises. Each piece will amuse you amply not only as a clock but as a standby screen. Moreover, you have pleasure for choice this time because there are multiple clocks.

We’ll update the works once every 2 months on this project. The next will be in August.

For the website use, the Blog-parts version is now available. (Limited time offer)
Simply by copying the source, you can display the clock on your blog.

The interactive art game “OPNIYAMA” was exhibited at the opening show of the comtemporary musem Palais de Tokyo in Paris (2001), the animation DVD for the swiss documentary film “Mais im Bundeshuus” (2005), and the guest artist at the world charactor arts festival “Pictoplasma Conference” in Berlin (2006).