DOTMOV selected works were also screened in Sendai and Osaka. Screening except Sapporo SOSO was its first attempt this year. 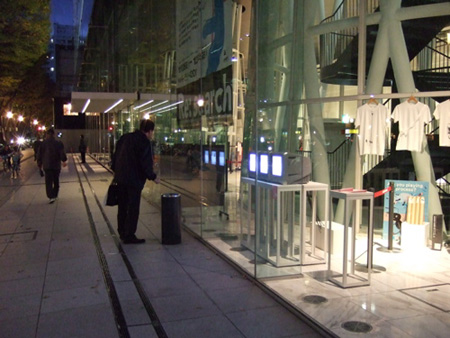 The venue in Sendai, sendai mediatheque, which shows overwhelming existence with dynamic building structure in the city, is the public facility supporting all people to exchange information through various media, and also the stronghold of art or film culture in Sendai. They constantly have many events or activities, and many citizens come and go in different floors for different propose. DOTMOV screening was done at the first floor, and the video and sound library on 7th floor. 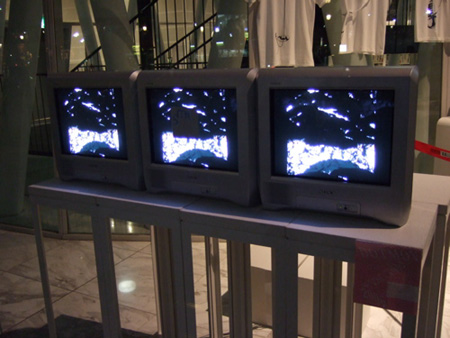 In addition to the steady screening, sendai mediatheque offered different approach from the other venues; everyone could enjoy each rental DVD of DOTMOV programs on their own. The venue also exhibited an interactive work “Code” with a bigger monitor, which to play music by typing PC keyboard, and people were playing to grow sounds and images by following an instruction. You can download the “Code” and experience it on your own. 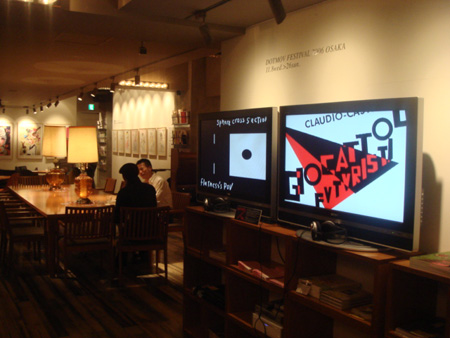 Osaka venue was digmeout. The biggest point of this venue is 24 hours, non-sleep gallery managed by digmeout, an art project of Osaka radio station FM802. The digmeout is also proactive in discovering and showing unknown talents.

It might be too late to think about it after finishing the 4th festival, but what is DOTMOV? Because the number of screening places increased this year, DOTMOV works were seen by a wider range of people, not only by creators. At sendai mediatheque where also offers the window screening with 3 monitors, I especially found people who were watching the movies for a while, then said “what on earth is this?”. This “what on earth is this?” might be the keystone of DOTMOV, I think.

The fact that there are still unknown and original creative “what’s this” to be produced in a new form, while there are already plenty of films or videos in the world. The fact such new forms to be gathered from all over the world in this way. To be able to actively know and see such facts, the opportunities to be inspired, and its stance. The possibilities of collaboration of the image rendering out side of the screen, such as between interactive elements, fashion and other performances. The free free attempt is also one of DOTMOV features; a collection of selected works “DOTMOV DVD” was released from IdN in 2004, “DOTMOV Tshirt” from BEAMS T in 2005, and the expansion of screening places this year.

DOTMOV is free description in all elements, creators, their works, events, the form, and keen purposefulness, and I hope it continuously to be the place to meet unknown talents being asked “what’s this”. It will be great that more people can experience this in many more places, and not only the simultaneous screening, I cannot stop hoping to meet with incidental occurrences of expressing, which cannot be anticipated yet at the moment.