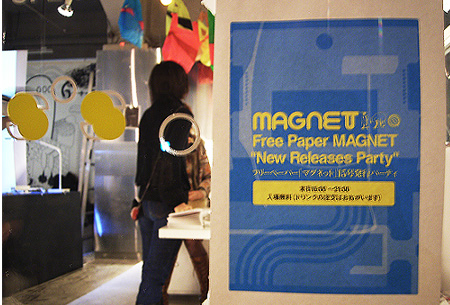 Last month, we did the foregoing publication event “MAGNET NO.15 RELEASE PARTY” with a publication of “MAGNET“. This is a new attempt, and I think that is something of an upgrade. The basis not only introduced the mood of the party but also introduced the history of “MAGNET” and the effective “re-introduction” of “MAGNET” which is coming to the forth publication anniversary whether you read “MAGNET” or not.

What is “MAGNET”? To put it shortly, it is a free-paper which introduce art・culture, and it is published every other month. Who is making it? When you look the credit line of the magazine, it said publisher is “Numero Deux“. This is a creative unit I’m presiding over, and started it in 1999. The central activity is to produce a Web-magazine, “Numero Deux” introduces art culture. We upload mainly the articles of interviews and news on the net. “MAGNET” is a new project from 2002 when were coming to the forth anniversary of “Numero Deux”‘s activity. The idea and the connection which were appeared by the four-year activity of “Numero Deux” enabled to publish of “MAGNET”.

Some people might feel that the new twist from “Web” to “paper” is the reverse from the age. But I did “paper” yet, because I wanted to make the “paper” media was premised on the net-age with putting the four-year experience to account. I want you to think that “MAGNET” is a new born “paper” media with recognizing well the existence of the “Web”.

“MAGNET” was published in 2002. In the case of publishing a magazine, usually there is made a central concept but I didn’t pretend to stuff up the part. About the contents, I wanted to accept flexibly the stream of the age and a meeting with piling up the number of the magazine. But in case I make every parts to be free, it will be instability. Then it won’t be attractive. To be clear it, the part of the foundation that “to publish on every other month”,”to be usuful reading for reader”,”to select art-director and photographer carefully” were dicided firmly against the concept. I think that the strong foundation will make us can offer the unity thing to reader even if the contents shake flexibly. The text has the live voice of the artists possiblly with an interview for the subject. About design, with taking the risk of adapting a new design to the feature theme every time, this magazine is insistently「the media which introduce the art」, so I decided that itself must be art, and an editorial design is supposed to be put out the interest of the design as shade. 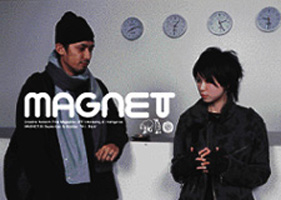 Basically I work a editor in chief, drawing up a feature article and deciding it. But it depends on the issue, there is the case of bringing a plan from the outside. The case also arranged like “MAGNET”, or it is unmeaning. We deal with the theme which is all about art culture, from the old to the unknown quantity. I think “the best one” than “some selection”, so only a feature article per a number. On the basis of these, from this year, decided three keyword “design (on the wide meaning, purpose and plan)”, “life”, “thinking” reflect on the space, I think that I want to make the reading like suggest lifestyle to reader. Without inserting a general notice information, we make with feeling of “a book” rather than “a magazine”. 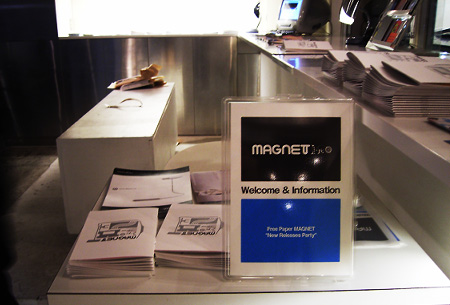 The end of February, 2006, “MAGNET” NO.15 was published. We decided to do the publication event as a new attempt from this year. the place is a gallery cafe “SOSO” produced by SHIFT. From 19:00 on 23th of February, the thought that the publication event of the free paper to be a pay event was strange, so then I decided admission would be free. Visitors received “MAGNET” at the book event as the first distribution place. 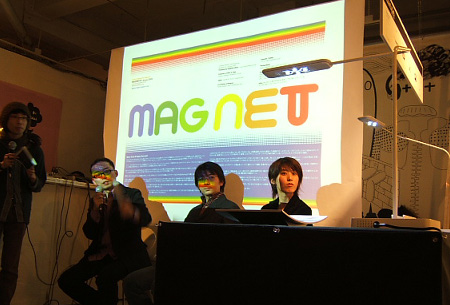 On the central wall, from start to end, the slide show was projected slowly and directed the “MAGNET” world. For example, the page of this time “MAGNET”, every cover visuals until now. The six products of TOKYO product maker “BALMUDA DESIGN” which were featured this time simply put on a black clothy covered display stand, from wall above the products, made the panel of the product’s name, and hung on with a thin gut. 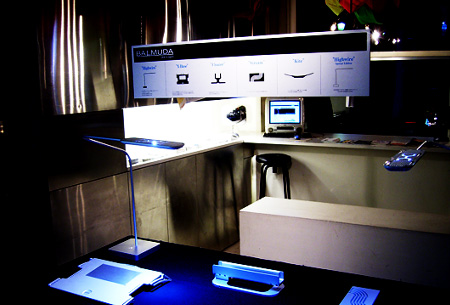 The lights were lowered and the image was that the panel was floating in the air. Back numbers were displayed near the window space. About 30minutes into the time, Mr. Kajita “Sapporo Interview Magazine” conversed among the editor, artdirector, and photographer. Something like a shade put in an appearance(what does this mean?). The basis of the event is of the foregoing publication of “MAGNET” and the communication space. This time, the basis of the format we want to continue from the next number.

“Article（plane）and Real”. I think this is the theme of “MAGNET” this year. Publication plane space, I want to produce the determined contents in the publication event which is 3-D and live feeling, a real place. I want to witness something that is not born in digital with everyone in the place. I want to take the meaning for have the party in this year. My best regards.