SHIFT also took part in the Nippon Connection this time as one of a “Nippon Culture” sections, and curated an exhibition at an art gallary called Mousonturm, several subway stations away from the festival center. We exhibited three wallpapers by Hideki Inaba, Chisato Shinya, and TAKORA Kimiyoshi Futori, and each artists’ own works, works by WABISABI who had an exhibition at SOSO, and also works by Tomoaki Ryuh who actually came to this festival and had a live drawing performance. 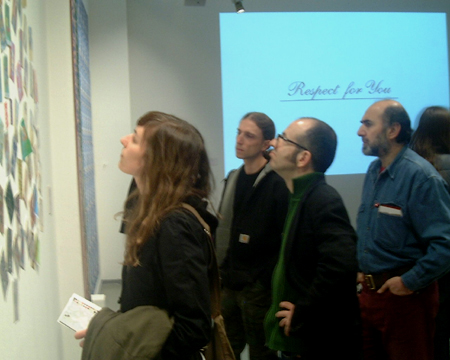 The following night of the opening, when “IZO” (one of the most popular films, many people couldn’t get a ticket) by director Takashi Miike was showing at the festival center, a SHIFT exhibition opening party was held at Mousonturm. People gathering for this party regardless of the distance from the festival center, brought smiles to the staff’s faces. There was a bar counter and a DJ booth next to the exhibition space, and DJ Harlokk who played at the opening lounge also presented pleasant sounds at the SHIFT opening party. 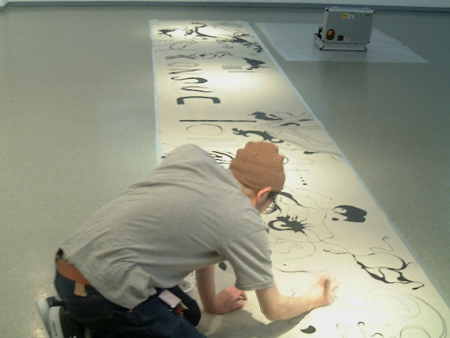 Above all, it was Tomoaki Ryuh who created an amazing drawing next to the party space for several hours without taking a rest. His original design appeared on a 10 meter length piece of paper as if it was something that had fallen down from the sky through his arms. In contrast to the lively party space, the exhibition space kept a strained atmosphere due to his powers of concentration. 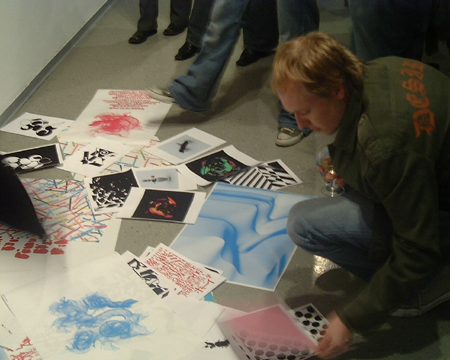 The graphic works by Tomoaki Ryuh and other artists SHIFT curated had no obvious “strong Japanese symbol”, which seemed like a theme of the Nippon Connection. When I was asked by one of the visitors why the artists don’t use the way of Shodo (Japanese calligraphy), I wondered why the range of Japanese culture, recognized or accepted in foreign countries, was still so narrow and small. Of course, Japanese people still keep their traditional culture; Kimono, Shodo, Shami-sen, Samurai, Katana, etc. However, it was more than ten years ago that the traditional style arranged to be “modern” came into vogue. Throughout the five days of this festival, I felt that “The latest Japan” in a foreign country had not sneaked away during that time. The traditional-taste modern style is certainly easy to understand and liven up, but it might be difficult to know the “present” Japan from it. 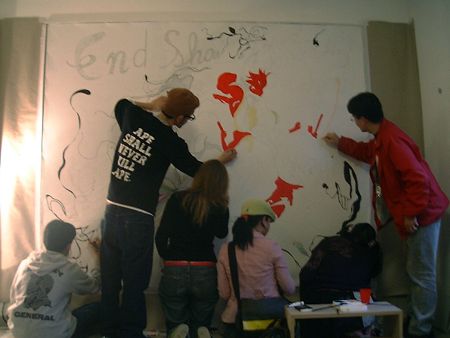 The next day of the SHIFT exhibition opening (the third day of the festival), Tomoaki Ryuh began another performance at the festival center. The drawing, on a large canvas with words of “End Show”, was expected to be finished by the last day of the festival. It was changed so that anybody could take part in coloring the piece somehow on the way. The completed work was not just Tomoaki’s own work. However, with his adaptable words of “I’m glad just if everyone can enjoy it,” many people’s eyes were fixed on the canvas. Catrin who was leading the SHIFT exhibition all the time from its preparation also took part in the coloring with her cute smile. She is a designer from Ofenbach, Germany who also participated in Nippon Connection last year and whose work had been selected by the SHIFT calender competition.