The big news this year was the inclusion of the music. Musicians from all over the digital motion and graphics planet came to show their works, and how they have been used as part of great projects that, we all know, ‘wouldn’t have been the same without the special piece of music’. So music is a big importance element from digital creation and it deserved to be shown at the OFFF.

This year’s festival was projected to a massive audience (even the ticket prices were cheaper than last year’s edition) watching as principal goal to meet the most of the people visiting the exhibitions and beeing able to watch the conferences and to interact with the artists. OFFF took over the Mercat organizing it as an audiovisual trip. On the big Auditorium, called ‘sala Mac’ started AZ2-Lab from London, Erik Natzke from the States, Random Studios from Argentina and le ciel est bleu from France. 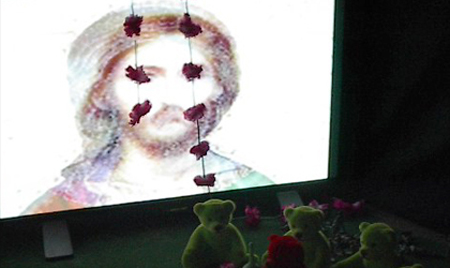 AZ2 LAb made an installation based on the feeling of the greatest hero of all times: JesusChrist, and their peculiar vision about the Hero. You could sit on an artificial grass carpet, where a wide-screen monitor displayed lots of images of icons and faces of Jesus in real speed motion, while toys, hanging-from-the-ceiling plastic flowers, teddy bears and little plastic soldiers were surrounding you while seated on the plastic grass. Picture yourself.

A view from the Auditorium, that became pecially full with the conferences made by Joshua Davis and Jemma Gura, Shapeshifter and Tomato.

A view from the auditorium

The public took place not only on the chairs of the set, but also on the chairs next to little color tables that became a terrace right in front of the main stage. KDlab wasn’t able to come for their conference, but they send a DVD with their last project. MediaTemple came right after. This year’s competition jury was integrated by: Nando Costa, Ulrich Troyer, Marcel-Li Antunez, Mannytan, Jose Luis Cienfuegos, Bob Shelvin, and Marisa Velasco.