A back-street factory in a corner of a shopping street was their destination. The person who appeared from the factory was the president of Maywadenki. Jones expressed his gratitude to the president and conveyed that many Maywadenki works gave him inspirations about art. This links to the production of high-tech works, as he demonstrated his prized work. Designs solve problems and they make a new vision, a real thing. Creating a hit product and necessary functions in design and business is work. “Ideo” is a company that has been breaking through these points around the globe. The staff at Ideo is Jones’ business acquaintance. The president of Maywadenki seemed to be interested that Ideo uses designs and art to solve problems. That result was Jones’ and other people’s projects. 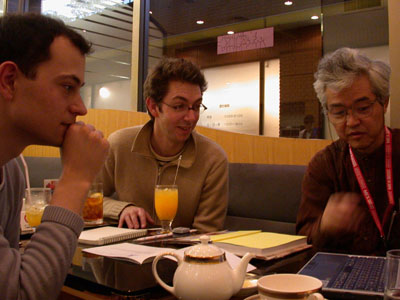 However, it was Tomio Gotoh, an another member of the party, who was interested in more than the president. We met Mr Gotoh, a key person of artdemo, in front of Maywadenki and he is known as a chief inventor of PC Engine that he developed while at his former employer NEC. A one-tipped tuner, a sticking iron and plastic without glue, an inkless courtesy photograph stamp, etc… Everybody paid keen attention to those treasures from Mr Gotoh’s pocket. According to Mr Gotoh, it was when he was promoting techniques at factories to business, he started to wonder about the potential of a project involving creativity at factories. 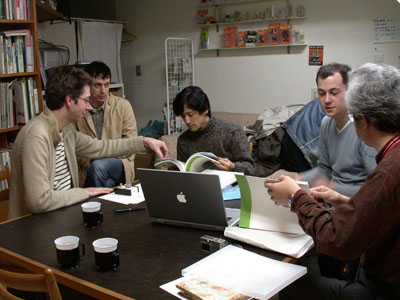 Artdemo is a demonstration-style event. Artists try to demonstrate their models of projects within limited times and rules. Finding a new communication method is another reason behind this event. Other art events tend to appreciate and evaluate works with a stereotyped style. The fact that an artist himself demonstrates his works is persuasive and this action shows his ability to innovate and solve problems. It is also possible to have a link between artists and people in artdemo.

Artdemo hit its second run this year. Jones and a designer at Ideo Graham Puhlin were the first artists, who demonstrated their works on a stage.